It’s something that traumatizes booklovers all across the world. Imagine burning precious books, watching millions of words go up into flames because of cruel fate.

Suffice it to say, there have been many times in history that just that happened. Whether by accident or by unjust hands, this is my list for famous incidents when books when up in flames!

The Library of Ashurbanipal, 7th century BC

Long before the Library of Alexandria even existed, King Ashurbanipal, the last king of the Neo-Assyrian Empire (spanning most of the Middle East, being the most powerful empire of its time), built a massive library in his capital. In it were housed thousands of clay tablets and scrolls filled with classic works. Ashurbanipal collected literary works from all over the world.

The city of Nineveh, in which the Library of Ashurbanipal sat, was destroyed in 612 BC when the Babylonians, Scythians, and Medes got together and burned the palace, including the library. Luckily, the burning of the library actually baked some of the clay tablets, preserving them for us in the modern age. However, all the texts inscribed on wax boards were lost. 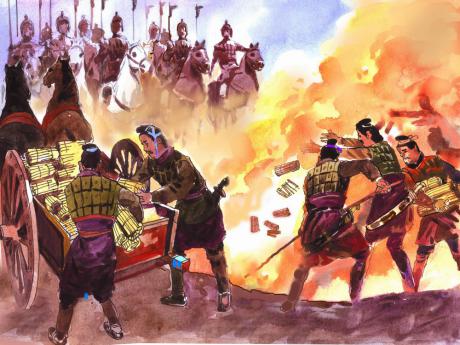 Let’s move across the world to China, during the reign of probably the most famous emperor in all of Chinese history, Qin Shi Huang (pronounced Chin Shi Huang). He is most famous for his burial site in Xian where hundreds of terracotta warriors guard his final resting place. He is also famous for uniting China.

In order to stop information from spreading that he saw as ‘harmful,’ Qin Shi Huang collected hundreds of philosophy books and burned them, also burying hundreds of Confucian scholars alive (he’s a really nice guy, can’t you tell?).

Many famous classics of ancient China (from the Shang and Zhou dynasties) are lost because of his actions.

So technically, this wasn’t exactly a fire. At least, not a fire in the same sense as someone actually starting a fire. Mount Vesuvius was the fire, with some lava thrown in for good measure. Most of you have probably heard of the tragedy of Pompeii, where the entire town (people and all) was wiped out when Vesuvius erupted.

A lot of people may not know that there were multiple ancient scrolls which were also buried. There were many private libraries within massive villas, lost forever in soot and ash. However, Vesuvius wasn’t completely horrible to books. It actually buried the Villa of the Papyri in 30 meters of ash, preserving it perfectly until it was excavated in the 1700s, where nearly two thousand papyrus scrolls were discovered. So, volcanos aren’t all bad.

England and America were in a war…again. So England decided to burn down US capital. But wait, what better way to burn it down than to seize 3,000 books from the Library of Congress, put them around the capital, and light them on fire. Great idea, right?

If this was their brilliant plan, I don’t feel bad at all that England lost the war of 1812. How dare they steal so many beautiful books, just to burn down something else!

You can tell I’m a bit possessive of books.

Going back to China again (because I happen to be incredibly fond of Asian history), during the Second Opium War, the British (and French and Indian) troops seized the emperor’s summer palace in Beijing. When they learned that a negotiation delegation had been imprisoned and killed by the Chinese government, they retaliated by destroying the entire palace. To get the size of the summer palace, it was five times the size of the Forbidden City…so it was pretty darn big. In fact, it took over three thousand British soldiers to set it ablaze.

The palace was filled with not only priceless art, but also irreplaceable works of literature, all destroyed because of the war.

Near the end of the Civil War in the United States, General William Sherman led a campaign throughout Confederate Georgia (from Atlanta to Savannah), destroying everything in his path in hopes of eliminating the infrastructure of the Confederates. Some of the targets were understandable (for example, military bases) because it was war, but entire towns were burnt down as well. This included numerous private and public libraries.

I’m used the umbrella term of WWII, as opposed to Nazi Germany, because there were a lot of books burned during this war, and not all by the Nazis.

Starting in 1933 in Germany, the German Student Union (controlled by the Hitler’s Nazi regime) campaigned in burning any book that disagreed with Nazi propaganda. As you can imagine, thousands of books fell under that umbrella, from Jewish to religious to classical texts. While there is no way to estimate just how many books were burnt, it was at least tens of thousands.

When the University Library of Leuven, Belgium was destroyed, nearly a million books were burned. German bombs landed on the British Museum in London, burning several hundred irreplaceable works. Those are just a couple examples in Europe.

To me, this world is very reminiscent of Fahrenheit 451 by Ray Bradbury (which was ironically inspired by the Nazi book burnings). A world where any book that contradicts government opinion is burnt would be a terrifying world to live in!

On the other side of the world, Japanese troops burned numerous Chinese libraries and universities, leading to over a million books being lost.

WWII was clearly a bad time to be a book.

Bonus Round: The Library of Alexandria

The library was one of the most significant libraries in the history of the world, and it was damaged multiply times when Alexandria was attacked. However, it was never burned or entirely destroyed. Even up to the 200s it was opened, so the myth that Julius Caesar destroyed it in 48 BC is exaggerated at best, and false at worst. Some of the library may have been damaged, but certainly not to the extent that the myth would have you believe.

Just something I found interesting!

Are there any famous book burnings you thought I should have mentioned? Have you heard of any of these? Let me know your thoughts down in the comments, follow my blog for more madness and, as always,

My Pre-Semester Checklist for College

End of the Year Book Tag