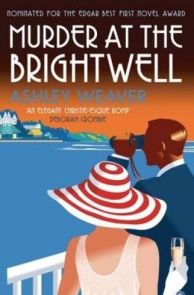 This is the shortest and most recent series on this list, and I was reluctant to add it simply because only three books have come out featuring this quirky sleuth. However, I decided it deserved mentioning due to one unique aspect: the relationship between the main couple featured in the series—Amory and Milo Ames. Their relationship is lovable but so strained.

Set in 1930s England, the first book—Murder at the Brightwell—introduces Amory to a murder which she must solve. Not only is it an interesting mystery, but her estranged relationship with her husband also catches fire due to this and future mysteries.

Honestly, I was not a fan of the first book—Silent in the Grave—both because of the solution to the crime and the pacing. However, after I read the second book I was hooked.

Set at the height of the Victorian Era, this series’ namesake—Lady Julia Grey—finds her husband dead and herself a suspect. Along with the help of the pretty awesome private detective Nicholas Brisband, she solves the mystery.

While these books are actually quite long for what I expect for a cozy mystery, what I love about this series is that the two main characters are very complex. The mysteries, as well, revolve more around the depths of human evil, based around the characters instead of completely on facts. Actually, out of the series on this list, this surely is the darkest, both in content and in characters. But I still absolutely love reading it.

Set in the 1920s, this series features Maisie Dobbs who, after World War I, sets up a private investigation office. Like Lady Julia Grey, I wasn’t a huge fan of the first book, which really feels like a bunch of short stories. However, I read the next book—Birds of a Feather—and have been addicted since.

Unlike many others on this list, I do not find Maisie Dobbs’ narration voice unique. The style of writing and interesting plots make up for it completely, and I cannot wait to read the latest book as of 2016—In This Grave Hour.

Now, I have not read all of these—I have only read two, in fact, but I am working on rectifying that. One of my favorite things about this series is that it changes perspectives between its namesakes. We see both Charlotte’s perspective and Thomas’s, making them both equally main characters, unlike many cozy mysteries which usually center around one protagonist.

Charlotte Ellison is a socialite from a wealthy family in 1881 England. Through murder, she gets drawn into the very different world of Thomas Pitt, a police detective. They fall in love, marry, and continue solving crimes together.

The one complaint I have about this series is that the two main characters do not really progress or change, making them less realistic—as in real life everyone changes, even though it may be in small ways. However, it is still a great mystery series.

It is also the longest series on my list, standing currently at thirty-one books—the next planned to come out in 2017.

I find it a fad in current historical mysteries to feature a famous—often fictional, sometimes real—person as the protagonist. There are actually two such series featured on this list, and this is the first.

This features a fictionalized Jane Austen—no, the real Jane Austen did not spend time solving murders in her spare time—solving baffling mysteries. I love the mysteries, though many of the background characters do fall into certain tropes. The biggest complaint I have about this series is that my favorite character dies. No, I will not give away any spoiler, but whoever has read it already will probably know who I mean.

I also like this series because each book is filled with historical tidbits about both Jane Austen, her novels, and the Regency world. It’s one of the few series I have read where the author went above and beyond in researching each and every historical detail. Even without being great mysteries, I would read these books as historical fiction. 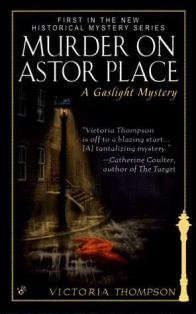 This series is very similar to the Charlotte and Thomas Pitt Series in that there are two perspectives—one of a girl who comes from a wealthy family and the other a police detective. However, personally I like the characters much better in this series.

This story features Sarah Brandt, a midwife who left her wealthy upbringing to marry a poor doctor, who later died. Now, several years later, she joins Sergeant Frank Malloy in solving baffling murders, many of them dealing with clashes between the poor and wealthy of turn-of-the-century New York City.

Again, I love these main characters, but it is also their slow change throughout the books that keeps me reading. Malloy’s character, in the beginning, really does not want to make waves in the corrupt police system and yet due to Sarah’s influence he becomes a much better man, in my opinion.

Similarly, this series builds on each book, instead of having stand-alone mysteries with the same few characters. So I would advise reading this series in order.

This story centers around Molly Murphy, an young woman escaping Ireland to come to America. Once there, however, she discovers murder and later opens her own detective agency, aided by the handsome police detective Daniel Sullivan.

It seems to be a common theme in these types of books to feature a woman solving mysteries with the help of a police detective whom she later marries, but I cannot help but enjoy this series. Also, I love that all the titles are common phrases or song lyrics of that time.  A fun, light series—though there are some serious themes as well.

Also, if you enjoy this series, check out other series by Rhys Bowen: Her Royal Spyness and Constable Evans. Both are great and would have been featured on this list if I had not wanted to only mention one series per author. 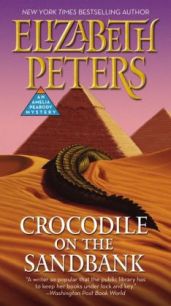 This is not only one of my favorite mystery series, but also one of the best series I have read in any genre. There is something for everyone in this series. There is quirky humor, passionate romance, dastardly murder, and Egyptian beauty.

Starting in the 1880s, it tells the story of Amelia Peabody, an Englishwoman who after coming into a large amount of money, travels the world. Finding herself in Egypt, she falls in love with the history and the opinionated Radcliffe Emerson. By the end of the first book they marry, carrying on their life as Egyptologists and mystery detectives.

This series is set over a long time, lasting from the 1884 until 1912, telling the story of the couple as well as their son.

It is just too sad that Barbara Mertz, the author who published these books under pen name Elizabeth Peter, died in 2013, just before her final book came out. So no more of these books will be published, but surely this will be my favorite series for the rest of my life.

The is the one mention on this list which is more of a thriller series and less of a cozy mystery. However, it has most of the features you find in cozy historical mysteries, so I am including it. Also, it features arguably the most famous detective in all of literature: Sherlock Holmes.

Set after World War I, it tells the story of the young, brilliant Mary Russell who happens to meet the now elderly Sherlock Holmes, who has retired as a beekeeper. She becomes his apprentice—as the title of the first book suggests—and later they marry. Like I said, the crimes they solve are more adventures and less mysteries as they travel the world. The first books are brilliantly written.

I remember first reading these books when I was a young teen, and I wished to emulate King in my writing, for her books are brilliant. Saying that, it does become clear in later books in the series that ideas have been exhausted and King seems to be writing this series because it is profitable, not because she has unique, interesting plots in mind.

If I missed any of your favorite series, let me know. And, as always…

Best wishes on your adventures in life,

Book Review: Lord of the Flies by William Golding

Book Review: The Sun Down Motel by Simone St. James